This morning, all I wanted to do was sleep in. Who wouldn’t with this cutie snuggled up with them? 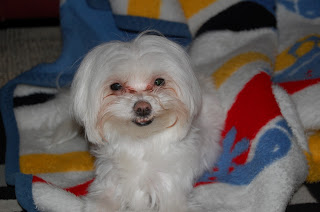 I felt so tired and achy that even the massage I had scheduled sounded like too much effort. Several months ago, I bought a coupon from the local paper’s version of Groupon for a 1-hour massage at Regeneration Fitness in North Little Rock. It’s something I never do, but the price was unbeatable. I had never heard of the place before and judging by the “Grand Opening” sign outside when I arrived, it hasn’t been around very long.

If you know me at all, you know that I have had the aches and pains and stiff joints of an old woman since my early 20s. I have tried physical therapy, chiropractic, pain relievers, etc., to no avail. Along with the diet I adopted 6 months ago, a good massage is really the only thing that seems to help. Key word here being a “good” massage. It seems to just make me more tense if I go to someone who wants to do a relaxing, rub-you-down kind of massage. On the other hand, they can go the other direction and leave me in pain and bruised. You know that song by Deena Carter, “Did I Shave My Legs for This?” There have been many times when I’ve gone to get a massage and thought immediately of this song. Not to mention, did I pay good money for this?

My massage today with Lisa was neither of those things. It was literally the best massage I’ve ever had. (To fully understand this, you have to imaging me saying “literally” like Rob Lowe’s character on Parks & Recreation, Chris Traeger. See a video here.) I was so glad that I got out of bed and went to see her. She addressed the issues we discussed beforehand, and also used hot stones and stretching to really help with the pain. I had never experienced the latter two methods in a massage before. I always thought that hot stones were just laid on the back, etc. during a massage like you see in the photos at spas. I never realized they could be used as a tool for massage the way she used them. I really need to start doing this more often because, as Lisa so aptly pointed out, I have “issues with my tissues.” Now if I could just have her with me every day to remind me to “take a deep breath.”