This year our anniversary kind of snuck up on me. I wasn’t even upset when Jeremy was scrambling around trying to make last-minute anniversary plans. I was in the same boat. What should we do? Where should we go? Who is going to be available to watch Coen at the last minute? Finally, I told him that all I really wanted was to go eat breakfast and then hike together as a family. 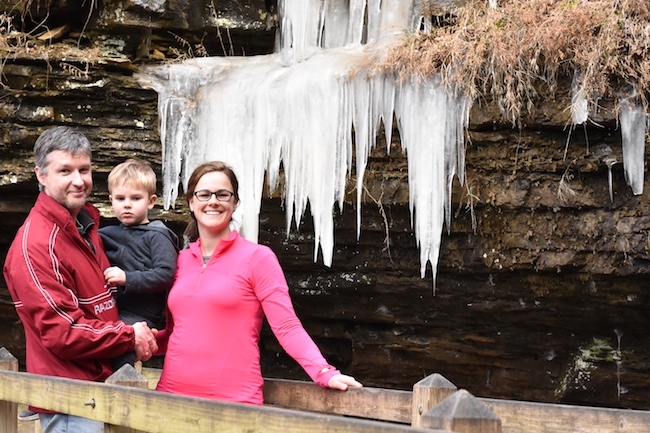 I picked out a trail that I’ve been wanting to explore myself before taking my Girls Who Hike group out on, but Jeremy balked at the distance from our house. I was disappointed and annoyed, and I let it be known, but I agreed to go hike somewhere closer. Compromise. It’s kind of important in marriage. Also, apparently, important in anniversary planning.

By the time we go in the car to head out for breakfast, I was already in a better mood. Feeling better about the hike since it was a new trail at least. We were going to hike at Devil’s Den, a local state park that I’ve hiked at before, but a trail I hadn’t been on yet.

Breakfast at The Farmer’s Table 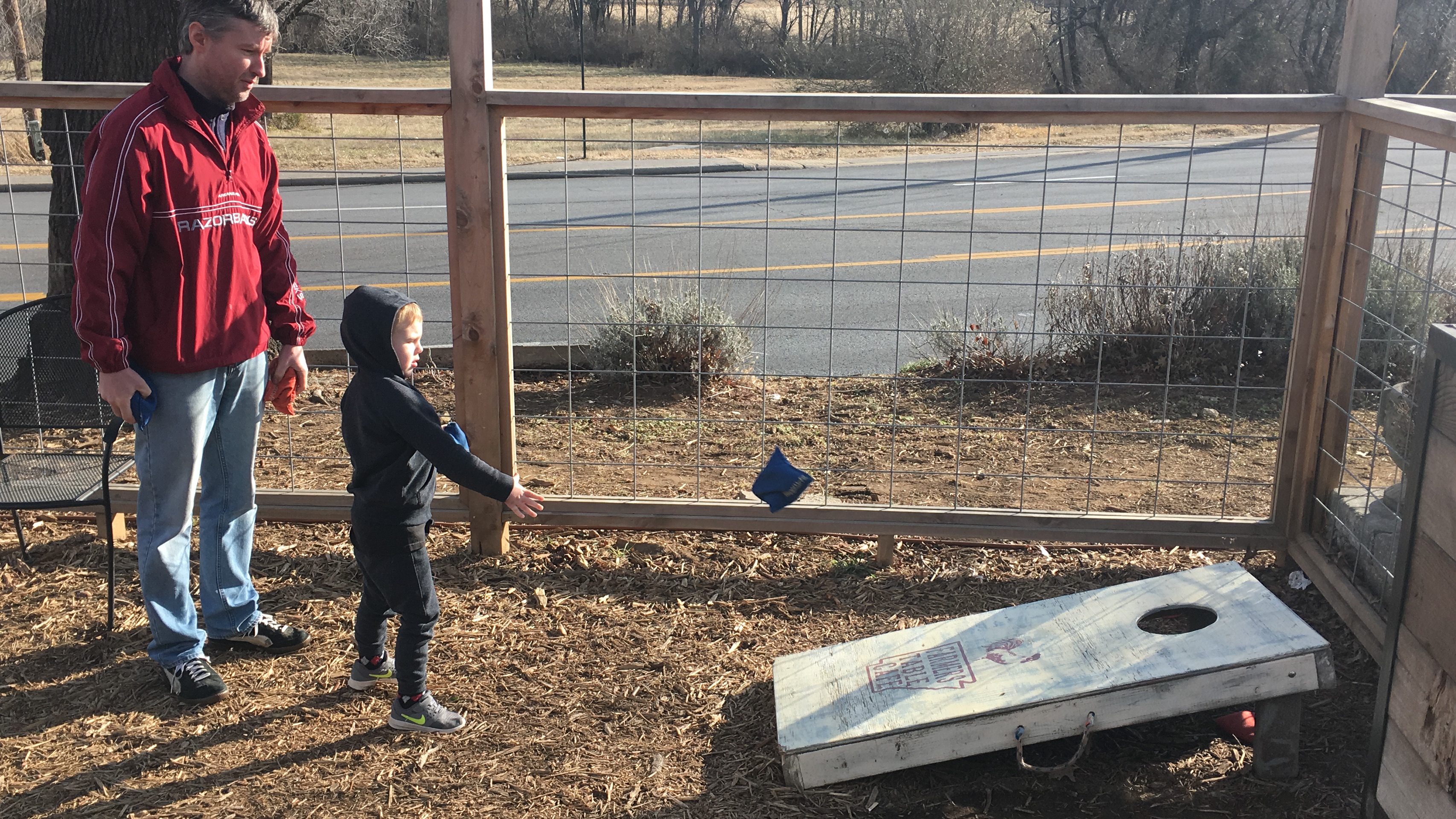 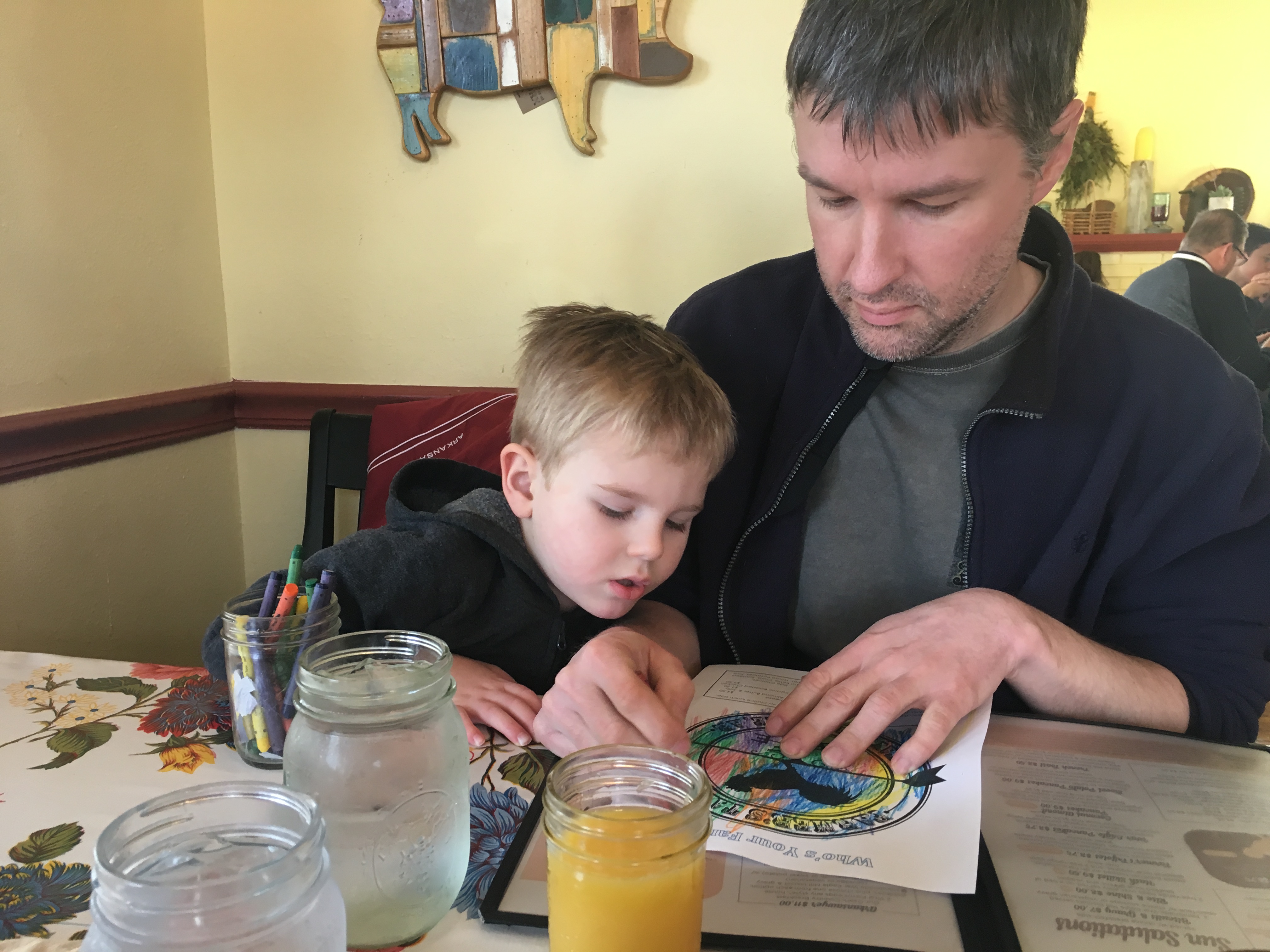 I perked up even more once I realized that The Farmer’s Table was now serving vegan pancakes! Coen loves pancakes, but we usually don’t order them at restaurants since he can’t have dairy. I ordered the pancakes to split and added an egg and bacon on the side. Jeremy got the Arkansawyer which came with regular pancakes and just about everything else. 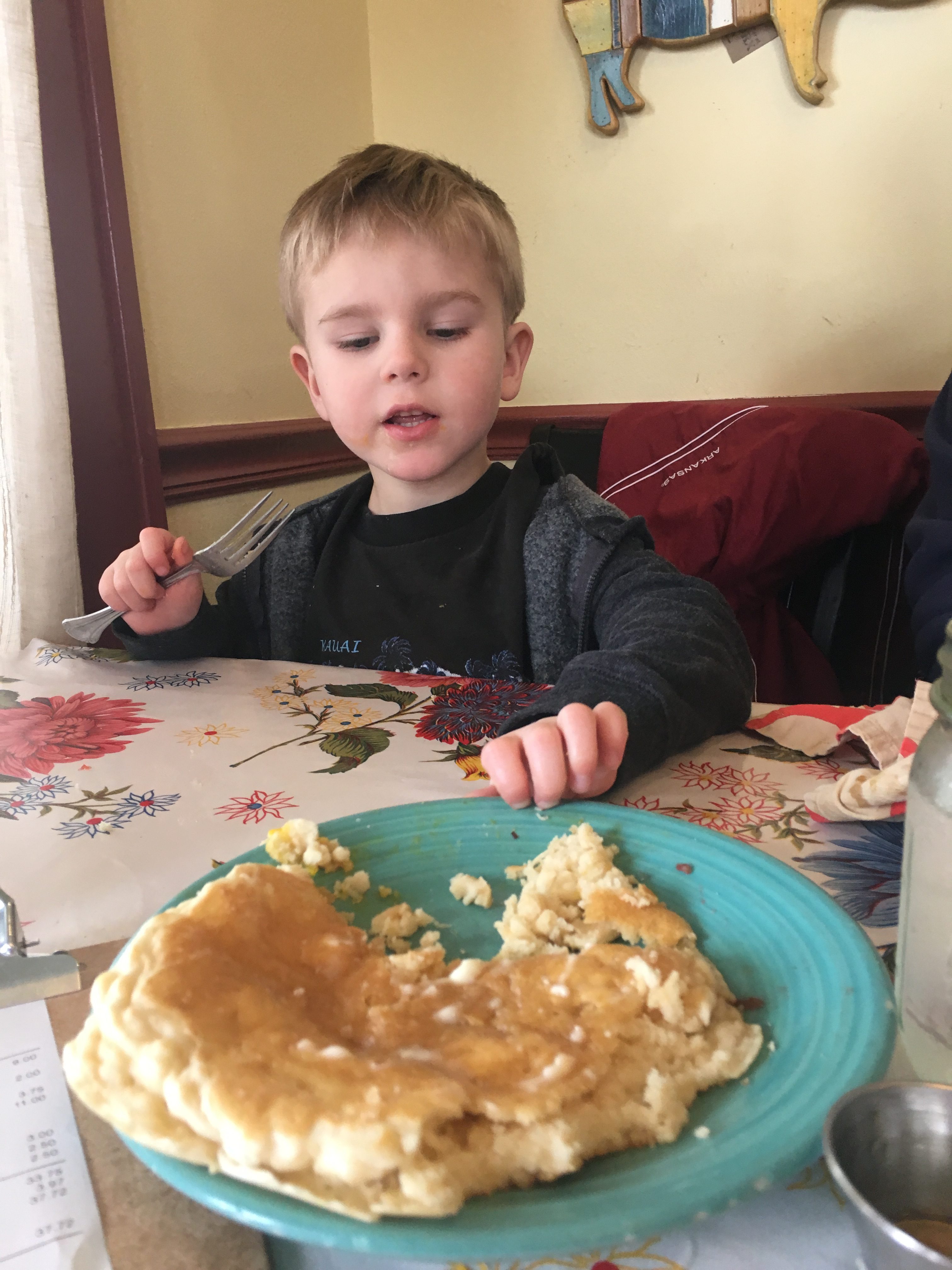 Once we had our fill of breakfast, we set off for the trail.

The road Jeremy decided to take got us to the trailhead more quickly, but it also involved several hairpin curves. I’d never driven to Devil’s Den that way and started to get a little queasy. Luckily, the curves ended and we arrived at the visitor’s center without incident (ie: I wasn’t revisited by my breakfast). 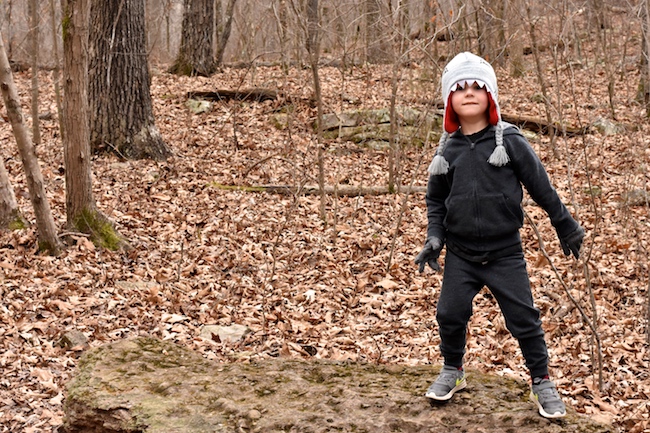 We decided to hike the Devil’s Den trail, a 1.5 mile loop that features caves, rock formations and some falls. The caves are currently closed due to white nose syndrome, but there is still plenty to explore. 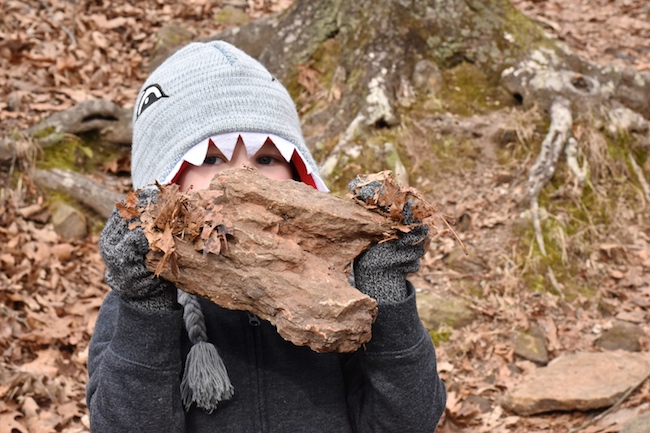 As we begun our hike, we discussed the trail markings and leave no trace with Coen as a refresher. At the beginning of a hike, I always bring up the fact that we cannot take any trail treasures home with us. For Coen, the most tempting things to bring home are rocks and sticks. I let him know that we can take a picture of any rock he likes instead of trying to take them home with us. 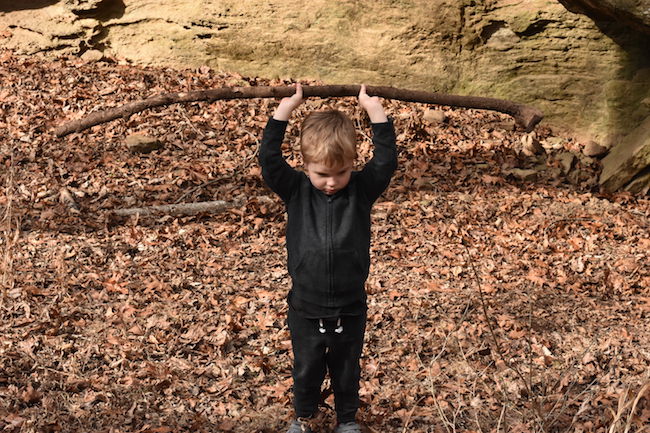 Most of the time this goes over well, and Coen moves along happily after taking a photo. However, he did come across one really cool stick that he wanted to bring home with him. It looked like a pickaxe and even I had to admit it was not like the sticks in our yard. (Another thing we tell him is that there are plenty of sticks in our yard at home).

After we took a photo of a not-so-thrilled Coen with the stick, we moved on. 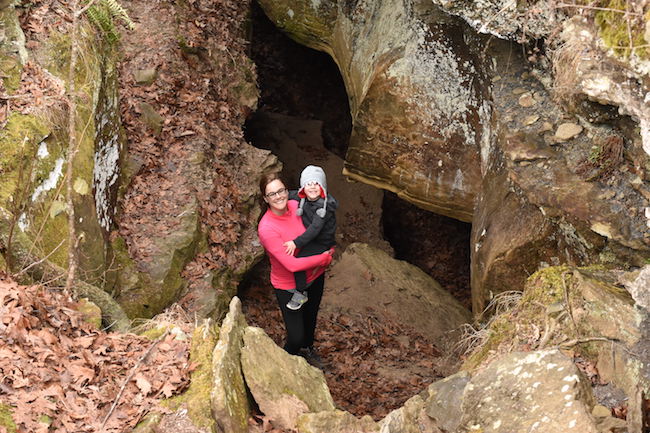 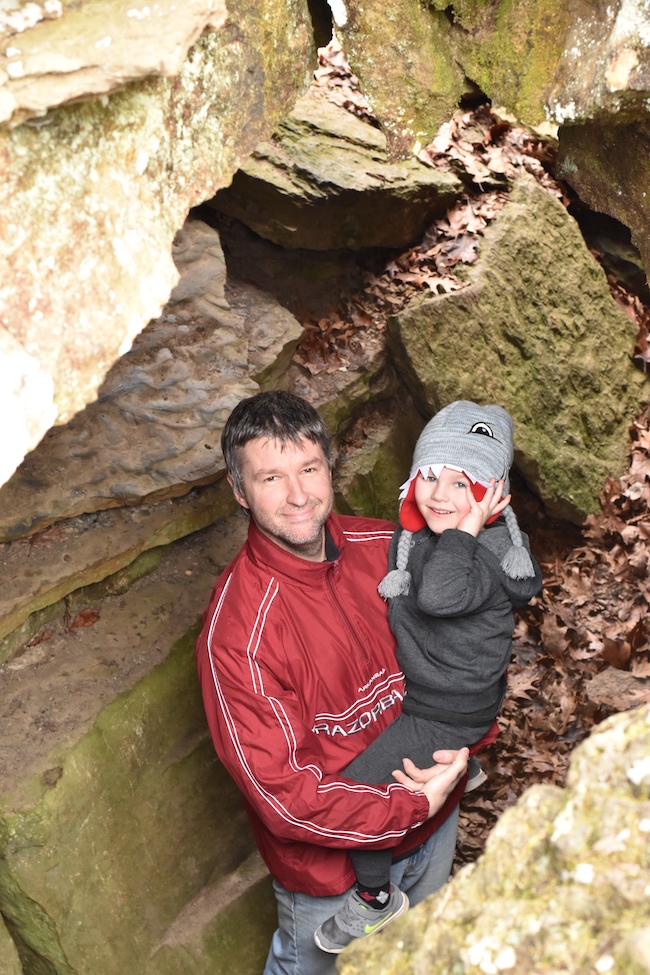 Even though the caves were closed, I was glad that I brought our headlamps on this hike. There were still plenty of deep, dark places to explore further. At one point, Jeremy wanted to go down into one such area while Coen wanted to go up and over. So we handed off the headlamp and began to climb. 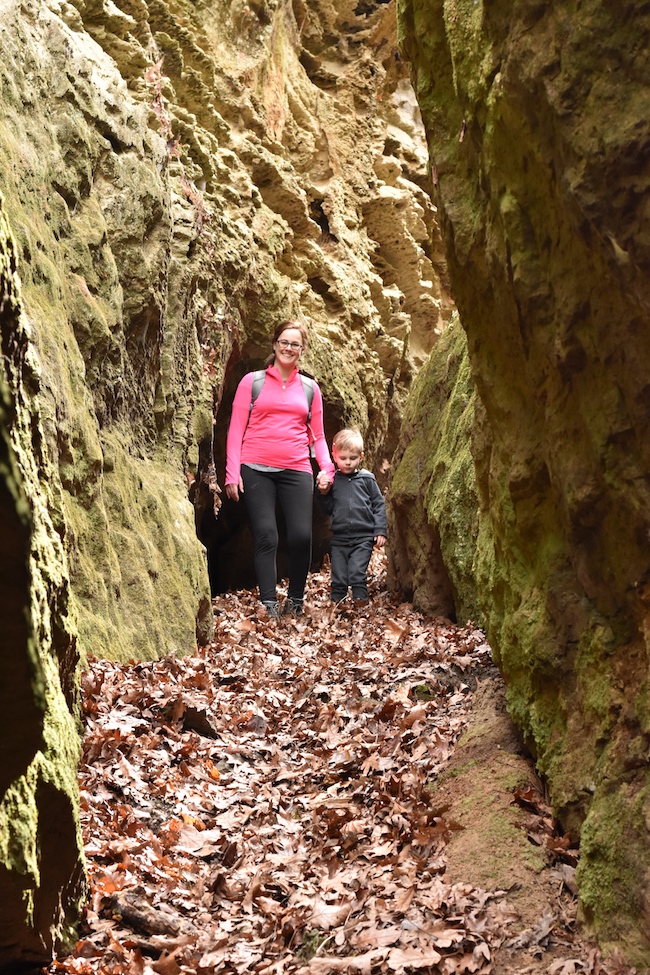 Once we were on top of the rocks Jeremy was under, we were rewarded with a great view of some frozen falls. We were even more thrilled to find a downed tree to use as a bridge to reach the falls. 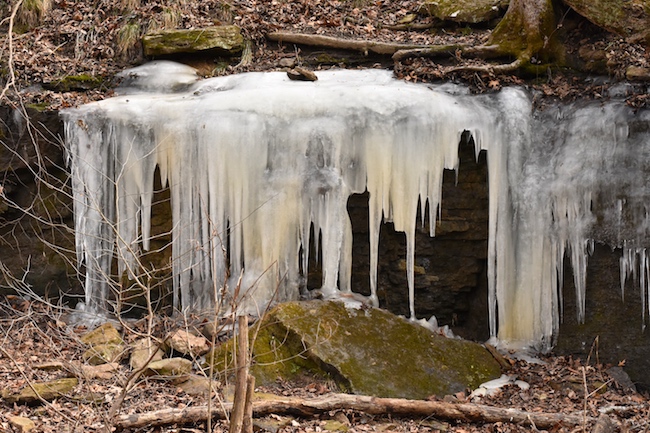 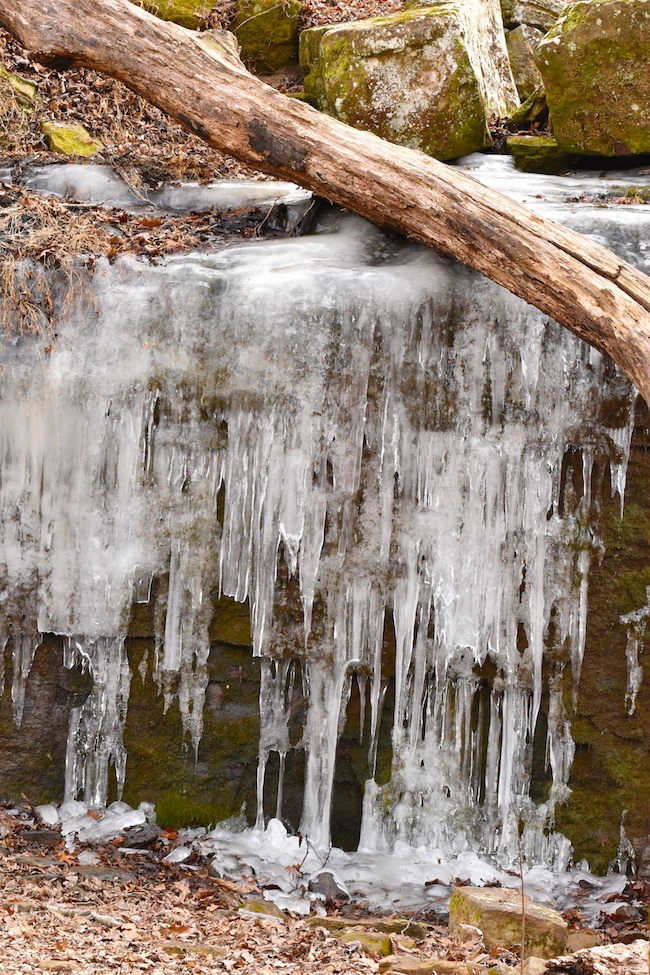 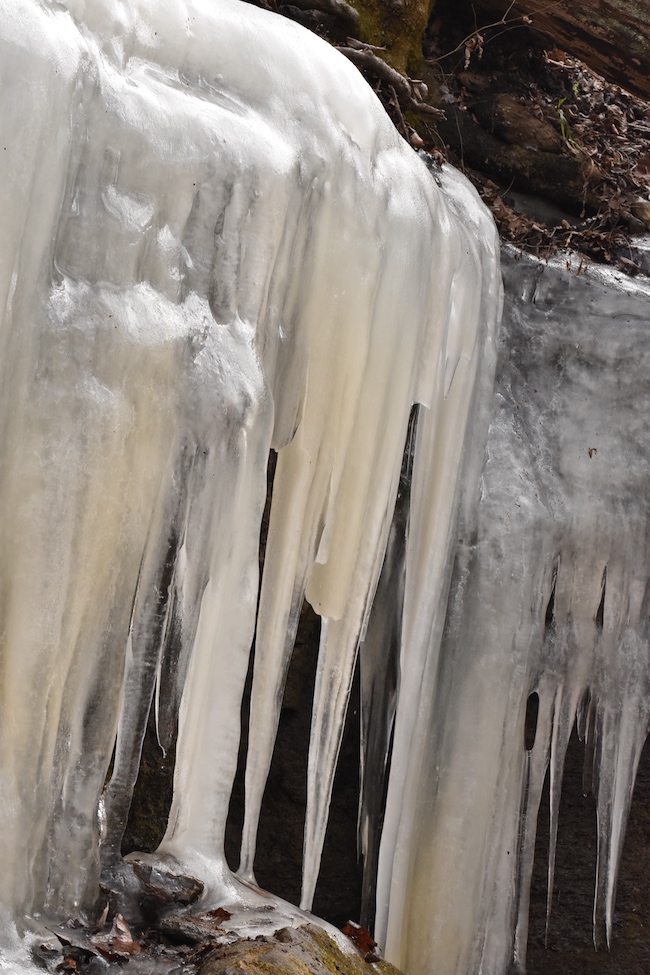 We were enjoying ourselves so much that we kind of forgot that Jeremy might be wondering where we were. As I was repeating to Coen to please leave the icicles for others to enjoy, I heard a familiar whistle. I hollered back towards where we had left Jeremy to let him know we were okay. He ran up to us, breathless and obviously concerned. It was a reminder that we always have someone looking out for our wellbeing and safety.

We started to get pelted by the birds and that was our cue to head back towards the trail. 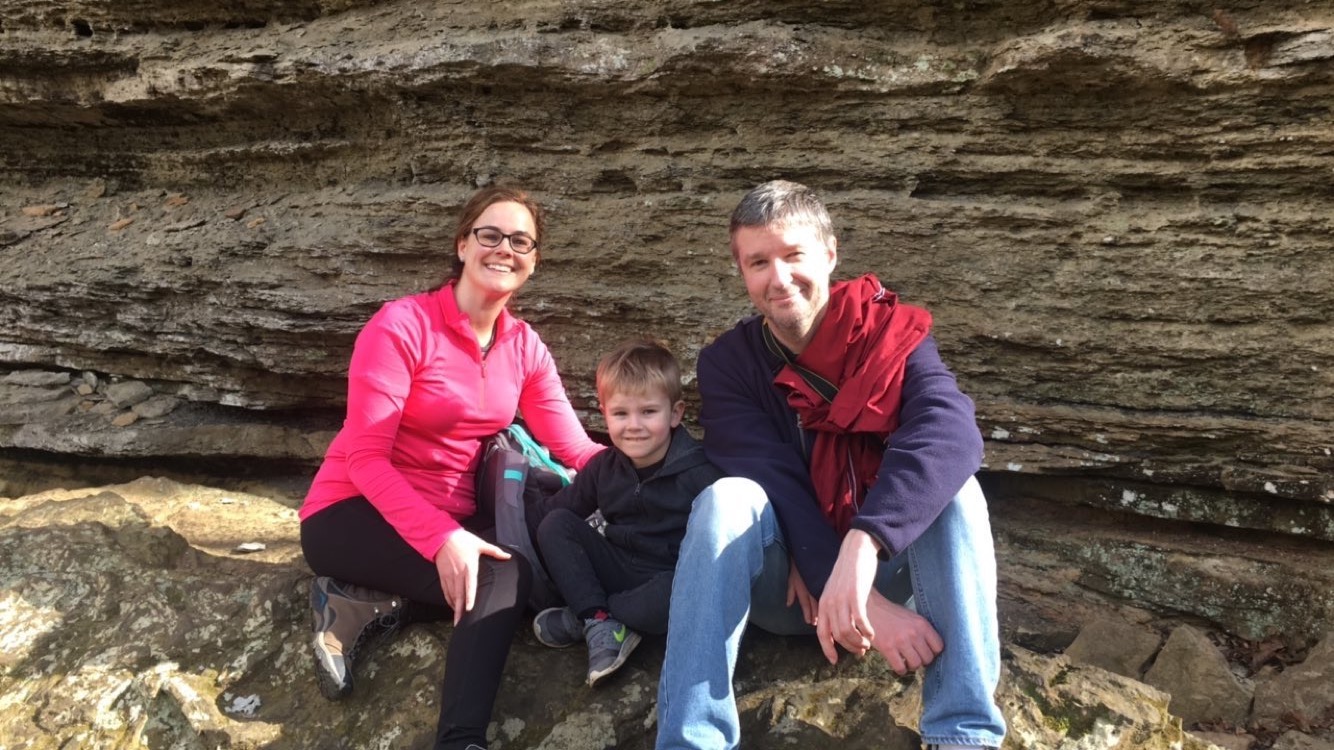 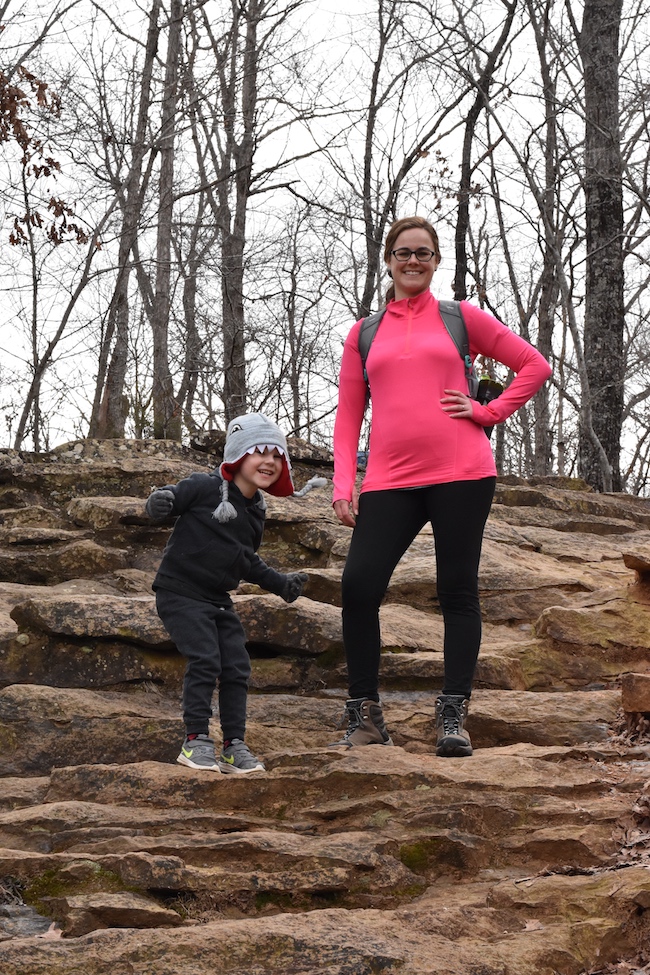 While we were stopped to take a break and eat a snack, a mom coming down the trail noticed me trying to get a family selfie and offered to take a picture for us. We seem to meet the kindest, most affable people when we’re in the outdoors. Another family took our photo on the bridge by Twin Falls after I offered to do the same for them. 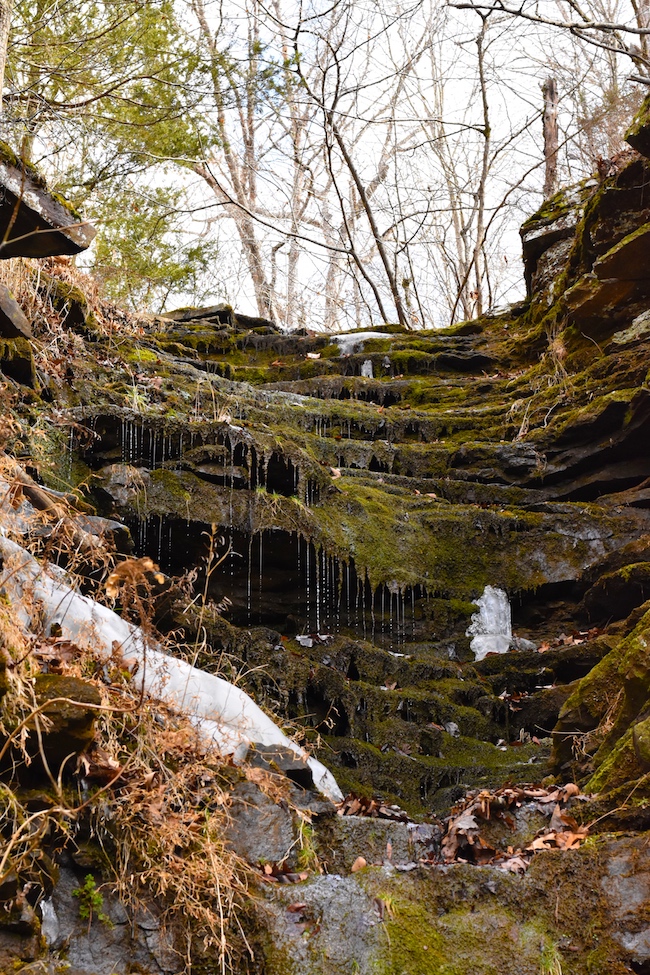 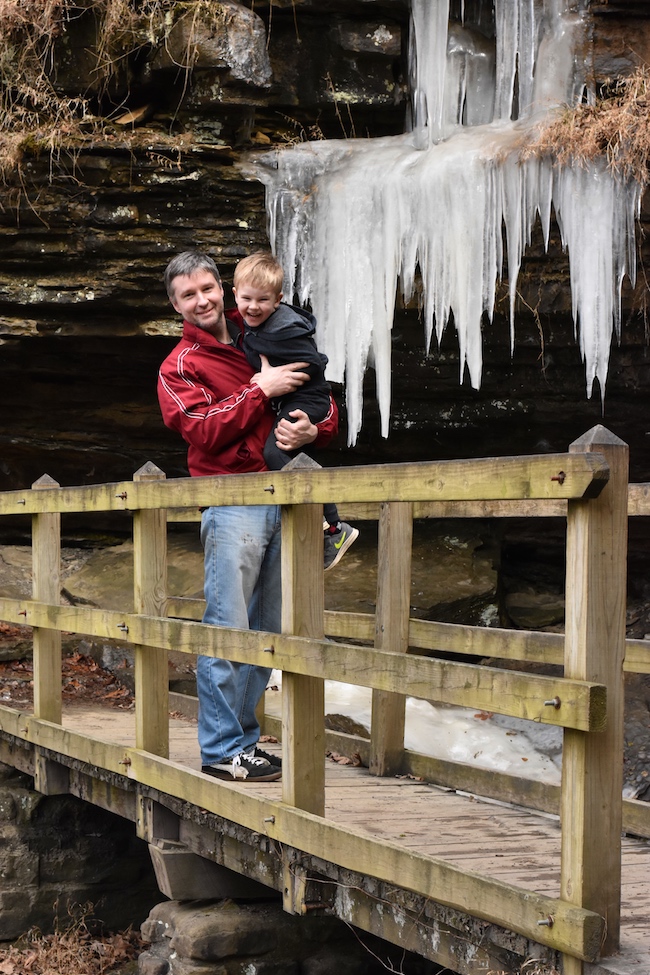 I have to admit that the hike we ended up taking was a pretty great one. I’m glad that we spent our anniversary in nature with the whole family. I’m looking forward to spending even more weekends out on the trails in Northwest Arkansas in the coming months! 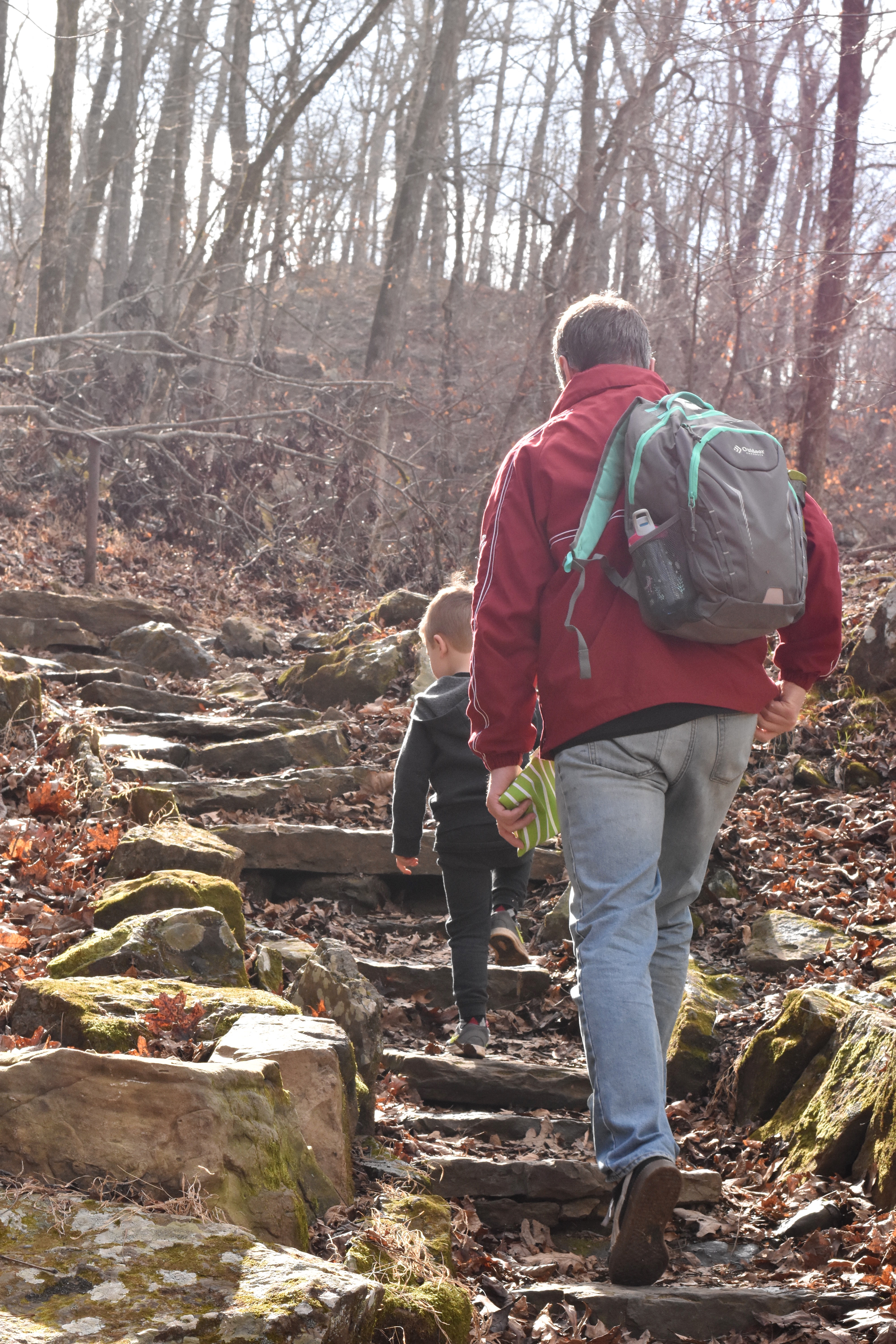 Thanks for reading! You may also want to read about the 10K Women Trail Project or my newfound Trail Tribe.